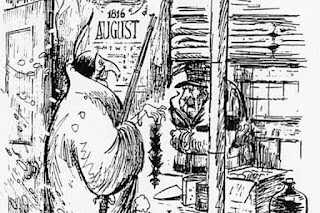 If I have an ancestor whose life was altered by a flood or tornado I'm not aware of them yet. I looked for names like Tempest, Gale, Snow even Bolt in my tree. Nothing! Who will be the ancestor of the week? 🤔
A few years ago I read an article about the bi-centennial of an extreme weather event. It was referred to as 1800-and-Froze-to-Death. Flocks of migratory birds "dropped dead down in the streets" of Montreal. Lambs died from exposure in Vermont according to the New England Historical Society. In Philadelphia the ice was so bad "every green herb was killed and vegetables of every description very much injured," to quote American Weather Stories. This was all happening in the spring and summer of 1816!

The primary cause of the Year Without a Summer was the eruption of Mt.Tambora, Indonesia in April of 1815. The aftermath of the blast created a volcanic winter which spread across the globe. According to the Farmer's Almanac, some of the hardest hit were the people of New England and eastern Canada. All through July, heavy frosts and occasional ice storms were commonly seen. At least one Vermont farmer was frozen to death in the great snowstorm of June 17, 1816. His nephew said “I was at my uncle’s when he left home to go to the sheep lot, and as he went out the door, he said, jokingly, to his wife: ‘If I am not back in an hour, call the neighbors and start them after me. June is a bad month to get buried in the snow, especially when it gets so near July. Three days later, searchers found him … frozen stiff." What were my ancestors doing during this apocalyptic time period?

I decided to zero in on my Québécois people. Here is an interactive map of Lower Canada in 1816. There was a bad harvest in 1815, so conditions were bleak before the deep freeze. The dark red markers are "Parishes in Distress" (Click the square in the upper left hand corner for details, and the right hand corner to enlarge. If you want, there's a fantastic compilation of 1815 - 1817 regional newspaper accounts of the phenomenon here 👀)

Isabella's mother Mary Jane Oliver must have had some strong genes. I'm in her 23 member DNA circle on ancestry. I was not aware of "Jeanie", as she was called, until I popped up in her circle. She was born in Hawick, Roxburghshire, Scotland on June 30, 1782. She and my 5th great grandfather, James Hargrave, emigrated to Canada around the time of the War of 1812. My 3rd great grandmother Isabella was the eldest of eight children. Seven children were born in Scotland, the youngest being born in Québec in 1815. What a shock it must have been for this family when the Year Without a Summer descended upon them in 1816. New immigrants with 8 wee ones. Lac-Mégantic, Quebec is about 95 km north east of Sherbrooke on the map above. They were farmers, so they had to be suffering.

The effects of this extreme weather event caused changes in migration patterns. Many New England farmers pulled up stakes and headed west. It also effected politics, the economy, the arts, and social structures for years to come. There are many scholarly studies about the period including this book. Some suggest the terrible weather was responsible for creating Frankenstein's monster! When researching ancestors who lived during this era, it's something to consider. Maybe their movements were necessitated by the Little Ice Age.