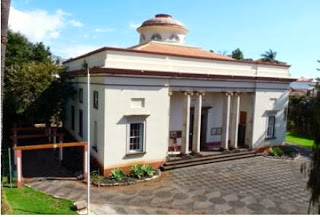 The British Cemetery in Funchal, Madeira, Portugal dates back to 1770. Prior to that, when a person who was not Roman Catholic died, their remains were buried at sea or thrown from the cliffs at Garajau. The cemetery is located next to the Holy Trinity Church, which my 5th great uncle Henry Veitch designed. Madeiran law at the time prohibited Protestant places of worship from looking like a church. "The English Church" is a neo-classical structure with no steeple or bell tower. At the top of the central dome, there is an all-seeing eye, probably referencing the Freemasons, as Henry was a member of the organization. Seems to be the perfect final resting place for this controversial man, but he is not interred there.


Henry Veitch was the British Consul of Madeira. He was born in Selkirk, Scotland and was the brother of my 4th great grandmother Alison Veitch, who I wrote about here. She was a widow with 10 children at age 39. I discovered her brother Henry while researching Barbara Park, Alison's 4th oldest child. Barbara was married at the home of Henry Veitch in Madeira on December 4, 1823, nine years after the death of her father. Her brother Alexander and perhaps sister Euphemia were in attendance. Archibald Park, who was just three months old when his father died, moved to Madeira with his wife Elizabeth Solly Park in 1841 and raised his five children there. It seems as though uncle Henry Veitch was a part of the children's lives, which is commendable.

There are many tall tales about Henry Veitch in Madeira, not the least of which concerns his burial. Initially he was buried in the British cemetery, as custom dictated, but that was not his final wish. He wanted to be buried at his home, Quinta Jardim da Serra, with his beloved dog. His widow, 2nd wife Carolina Joaquina de Freitas Veitch, secretly built a mausoleum on the property and planted heather all around it as camouflage. At that time burials were not allowed outside a cemetery. One night his body was removed from the cemetery and carried up the hill to Quinta Jardim da Serra. They used torches to light the way, frightening people in the village, who thought it was something otherworldly.

Today Quinta Jardim da Serra is a five star hotel. They have preserved Henry's history. There is a BIO project protecting some of the original trees he planted, including the tallest tree in Madeira, a Eucalyptus, which is said to have mystical powers. He built several other buildings in Funchal including the current home of the Museum of Madeira Wine

I discovered that he was the great grandfather of Noel Coward. His son Henry Gordon Veitch had five children. Daughter Violet Agnes Veitch married Arthur Sabin Coward. They had three sons, the middle one being the iconic Englishman. That makes Noel Pierce Coward  my 3rd cousin 3 times removed!

There is a lot of information out there about Henry Veitch. Stories of possible smuggling, his meeting with the exiled Napoleon Bonaparte on his way to St. Helena, and of his charming way with women (ahem). He supposedly fathered many children whose descendants still live in Funchal. His internment caper was a suitable ending for a man who did things his own way. Here is a photo of his grave marker located at Quinta Jardim da Serra, contrary to the info at
Find a Grave. 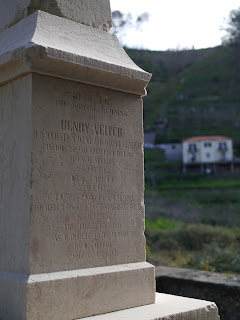 Here lie the mortal remains of HENRY VEITCH
H. R. Majesty's Agent and Consul General in this Island from 1809 to 1836
Born at Selkirk 2nd July 1782
Died at Madeira 7th August 1857
He built this Quinta de Jardin De Serra and he there in selected this resting place for his mortal remains
This tablet erected as a tribute to his memory by his widow Caroline I. Veitch