I don't have what most people would consider an heirloom. Any heirlooms I know of were appropriated by others 😉. What is an heirloom? A cherished item that someone who has passed on left specifically for you. I don't have anything like that. The "heirlooms" prompt has prompted me to be more specific about leaving designated items for my kids. I don't attach a lot of sentiment to material things, so it's not something I think about often. Maybe a letter would be nice too. 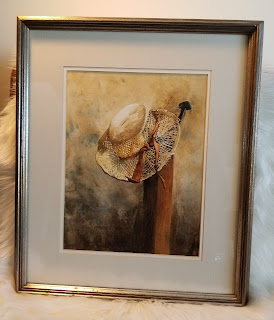 My mother was an artist. She painted hundreds of watercolors in her lifetime. I own a lot of her work. Each painting is special. She sold her work and gave many things to friends and family. I've noticed a pattern that when someone dies who owns her art, people get in touch with me to see if I want any of her paintings. Not anything else, mind you, just her paintings. Weird.


It seems fitting that my heirloom post should be Fran Park originals. I have several that I love and hang everywhere I've lived. She gave them to me while she was still alive so I was able to let her know how much I like them and that I appreciated her thoughtfulness.


Franny was a very chatty person. She could talk your ear off. Her paintings are the opposite. They seem very quiet, serene and focused. Still, as if creating them was a meditation. 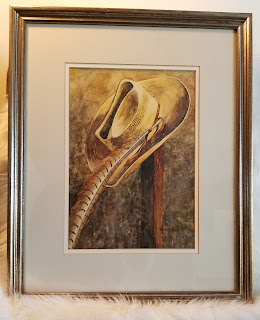 I always have these two hats hanging somewhere prominently. Home is where you hang your hat, right? An old boyfriend of mine brought my mom a big, beautiful feather one day. She really liked this guy (named Guy). He would flirt with her so much I used to joke that the two of them would make a better couple. She got such a kick out of his gift that she added the feather to the hat she was painting. I don't know where the lady's hat came from. I remember it hanging on a coat rack in her studio. These two always hang side by side. When I look at them I think of her and Guy, and how well they got along. I guess that's the point of an heirloom isn't it; to call to mind the person who gave you the item. I take it back, I do have heirlooms 🖌