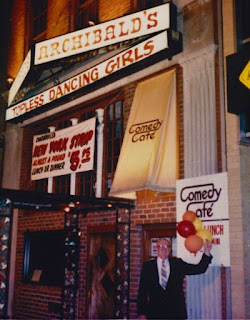 
There are 6 Archibalds on my first page at ancestry.com, and a grand total of 19 I've discovered so far. It's an unusual name. My father was the 3rd Archibald Beverly Park. Because Archibald wasn't "unique" enough? 😊 That's him with the balloons in front of the Archibald's Topless Dancing Girls sign on K Street in Washington, D.C. He was a funny guy.


The earliest Archibald Park I found was born in 1682 in Foulshiels, Selkirk, Scotland. He was my 6th great grandfather. There has been an Archibald Park in each generation ever since, all the way up to my father's time. My parents put an end to the run by naming my brother Mike! John Michael Park, but he went by Mike. My uncle John Park, Archie's brother, had daughters, so no Archibald there either.

The name is Teutonic in origin and means "truly brave". It became popular in Scotland and was one of the top 20 names for boys until the 1930's. I was surprised when comedian Amy Poehler and Will Arnett named their child Archie. In 2008 when their son was born, 3 of the top 5 boy names were Aiden, Jayden and Caiden. Perfect time for Archie to make a come back. It's refreshing!

Maternal great grandfather was Archibald Ferguson Dempster. He was married to great grandmother Catherine Campbell. Both Archie, (his nick name) and Katie (her nickname) had fathers named Archibald. One day when I'm feeling very patient, I'm going sort through all the Archibalds on my mother's side. A  few families emigrated to Ontario, Canada in 1830 from North Knapdale, Argyllshire in the Scottish Highlands. It's an area rich in history and a trip there is definitely on my bucket list. If you have Highlander kin, you might enjoy the Knapdale People website. It is full of links, data bases, maps, clan histories and everything you could possibly imagine. I found it very helpful and interesting.
In addition to a copious amount of Archibalds, my Argyll & Bute line is full of Campbells. No surprise there, but it's daunting. Third great grandmother Sarah had a maiden name of Campbell. She was Sarah Campbell Campbell!

When a name is passed down from generation to generation it is useful for genealogists.  It's a good clue that you are on the right track when you see names repeating in families. All of "The Archies", as I refer to them, were guide posts. Much like John Jacob Jingleheimer Schmidt,  ♫🎝"His name is my name too" ♬🎝(sorry 😁). I have learned that the Scots of olden times had a naming pattern for successive children. It goes like this:
In the case of this Campbell family here, all the three sons would be named Archibald. Two daughters would be Sarah, as that was the name of both Archie and Katie's mother. Oy! This is why I keep putting them off. One rainy day I will settle in with a big pot of tea and figure these folks out.🍵