There's a whopper of a "Family Legend"  that has been circulating in the Marr family for centuries. Family historians, genealogists and fortune seekers have been trying to prove their connection to the Earl of Mar, and claim their stake in vast land holdings in the UK. Years ago, I found a notice in my grandmother Jean Marr Park's old papers. I posted it on ancestry where it has been shared over 200 times, and reposted even more.The original is in a file in storage, and I'm too lazy to go hunting for it at the moment. I'll post a transcript of the whole thing after the jump. Scroll through if you would rather just read why the descendants of Lawrence Marr (my 6th great grandfather) are convinced he was the rightful heir to the Earldom.


Here's the article (in italics) which appeared in The Detroit Genealogical Society Newsletter by Eva Murell Harmison. Ms. Harmison was an editor for The Detroit Society For Genealogical Research Magazine throughout the '60's and early '70's.
Calling The Marr Families if Early New Jersey, Pennsylvania, Canada, Michigan On September 4, 1874 this notice appeared in a Lansing, Michigan newspaper: "Marr Family Convention, September 1, 1874: On Tuesday afternoon, representatives to the number of 26 held a meeting in this city at the Chapman House and formed a state organization for the purpose of proving their right to the Marr estate in Scotland... the meeting Tuesday brought together uncles, aunts, nephews, and nieces who had not seen each other for years.." As far as the writer knows, this was the only meeting held. It seems evident that it was sparked by the descendants of Lawrence Marr. Data on this family appear in a number of sources, but the "Marr Family Chart," by William Price Marr (1919) - a copy in the Library of Congress - show the family:


WILLIAM (2) MARR, b. 1751, said to be buried in Cherry Valley PA; m. Ann --- and lived in Mt. Bethel, PA. Records are sketchy. It is thought, but not proved, that *William was the father of the Marr brothers who emigrated to Markham, York Co., Ontario in 1801. The four brothers were: William, who died in 1862 aged 92 years; Joseph; John who died in 1808; and Alem. The petition of John Marr from Stamford "humbly sheweth that your petitioner came into the province about two years ago from Pennsylvania with three of his brothers and their families and with his mother and sister (who are since married) who constituted your petitioner's family, his father being deceased. That your petitioner has a yoke of oxen, et cetera... and prays your Excellency to give him a Lot in Markham for immediate settlement. Granted Nov. 9, 1801." Another source mentions a James and Mary Marr of Mt. Bethel, PA, who also went to Canada and settled in Markham Township. Please contact this writer if you are connected with the William Marr branch.


THOMAS (2) MARR, b. 1753 is said to have died enroute to Canada. He had lived at Mt. Bethel, PA. Charles S. Marr, elected Secretary of the Meeting in Lansing, Michigan was a grandson of this Thomas whose children were: John; Richard, b. 1778; Lawrence; and Michael Loomis.


Another short article in another DGS newsletter gave the information that John Marr was born in Upper Mount Bethel Township, Northamption County, Pennsylvania, 1 September, 1800, son of John and Barbara (Brooks) of Pennsylvania and Markham Township, York County, Ontario. He married in Markham 31 December 1822 to Esther Noble, daughter of Stephen and Ester (Smith) Noble who came there from West Springfield, Massachusetts. John Marr came to Howell, Michigan in 1839. So who was their progenitor, Lawrence Marr? 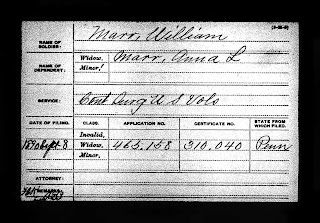 William Marr Sr. was my ancestor. According to the U.S. and International Marriage Records,1560-1900, he was born in 1732 and married Ann (also known as Anna L.) in 1764. He was a Private for the Pennsylvania Militia during the Revolutionary War. He died on February 4th, 1789 in Northampton, Pa. His son William Jr.  (along with the brothers mentioned above) did emigrate to Markham, Canada in 1801. I posted about their journey for Week 28 - "Travel" here.

If you're a fan of the TV show Outlander, you've heard of the Earl of Mar. He is one of the real life characters featured in the show. He is described as "a Jacobite whom Jamie corresponds with. An elderly, courtly man, he is the most respected of the Scottish Jacobites in Paris and had been the primary supporter of King James during the first Rising in 1715."  Apart from corresponding with lead character Jamie, the description is historically correct.
This is where it gets confusing for me, not to mention far fetched. According to one Marr family legend, Lawrence Marr is the brother of that Earl of Mar. The following description is from "The Longpoint Settlers; Sketch XXV - The Earl of Marr, The Marrs and the Lemons of Longpoint" ...

"It is said the Earl of Mar who led the insurrection in 1715 was a bachelor, and left a fine property in the vicinity of Paisley, County of Renfrew; and it is said Lawrence was the only brother who married and had children. It is upon this condition of things that the descendants of Lawrence Marr base their expectations of receiving a fortune. It has cost them a considerable sum already by way of investigations, and the chances are that, after incurring additional expenditure, the fortune will still " be acomin'," as is the case with the fortunes of so many of our old families. As before stated, there is good circumstantial evidence in favor of the claim. Lawrence is said to be the name of the missing heir, and Lawrence was the name of the grand-ancestor of the family in America, and, according to a family tradition, he was a refugee from his native land on account of his participation in the Highland Revolt. David Marr, the old Norfolk pioneer, had in his possession, it is said, a pair of massive silver knee-buckles and a pair of silver shoe-buckles which had belonged to his father; and if these silver trappings had been worn by him in the Highlands, it would signify a social standing several degrees above the commonalty of the Highland peasantry."

You can read the whole story with source annotations here. There are two possible ancestry lines that have been claimed as belonging to Lawrence Marr, the other in the footnotes.

I grew up being vaguely aware of the "we're descendants of the Earl of Mar" story. It's reassuring to note that there were many other people that were raised with the same tall tale. Here's what I know for sure. My great grandmother and great grandfather had tea with the Countess and Earl of Mar! My aunt remembers the story well, but not exactly where it took place. We figured out the date must have been before World War 2. Her grandparents, Dr. and Mrs. Delaski Marr, were in Europe around 1937 -1938. Prior to their trip my great grandmother wrote a letter to the esteemed couple saying that they would be travelling to England, and asked if they could visit the castle. They received a response with an invitation to come for tea! The Earl of Mar at that time must have been Walter Erskine and his wife Lady Violet Ashton-Cooper. Their ancestral home is in Scotland, but my aunt's memory is that they had tea at a castle in the south of England, maybe Devon. There are many castles in the area, but I have no idea which one it might have been.

I'm sure that my great grandparents weren't the first to approach the sitting Earl of Mar and see if they could come for a visit. Nothing ventured, nothing gained, right? They must be aware of the story of Lawrence Marr and his descendants. With the accessibility and popularity of DNA testing, it would seem like a relatively (pardon the pun) easy mystery to solve once and for all. On ancestry.ca there is a growing DNA circle for William Marr, Jr. and Sr. That's one step away from Lawrence. If anybody wants to take on the science, I'm in!