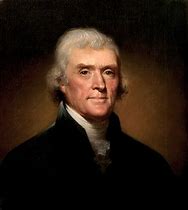 I didn't know who to post about this week. I'm finding out there are a LOT of people with the same name in my tree. When researching my 4th great grandfather, William Marr for the Week 15 prompt, "Taxes"  I remembered his grandson had a child named Thomas Jefferson Marr. I figured there had to be to be some kind of story behind that, so he's my guy for having the same name as the 3rd President of the United States.

Grandson John Marr Jr. was born in Pennsylvania, September 24, 1800 but he was raised in Canada. John Marr Sr. was granted land in Markham, Ontario, Canada in November
1801, and moved his family from Pennsylvania. John Jr. married Barbara Maria Brooks and raised 7 children in Markham before moving to Howell, Michigan where the couple had 3 more sons. Thomas Jefferson Marr was born in Howell on April 2, 1843. Maybe he was given the patriotic name because his father's political loyalties had changed?

For one generation of Marrs, the Revolutionary War the divided the family. This generation it was the Civil War. This is an excerpt from the obituary of Thomas Jefferson's father, John Marr, Jr.:

"... Randall, a son born after his parents came to Howell, {Michigan} went to Texas, and on the opening of the war of the Rebellion joined the Confederate army, and is supposed to have lost his life in that service. Another son, Thomas J Marr, born in Howell, entered the Union Service in the 5th Michigan Infantry, and while in that service was captured by the enemy, and died in one of the Southern prisons. Five of the ten children of the family are now living.

With some digging, I was able to piece together where Thomas Jefferson Marr was on the day he was taken prisoner. He was mustered in to the service of the 5th Regiment, Livingston County, Michigan in February of 1864 at 21 years of age. He had only been a soldier for 4 months when he was captured. On the Civil War Prisons website, I found his record showing he was captured on May 21, 1864 at North Anna Lake, Virginia and taken to the notorious Andersonville Prison in Sumter, Georgia. This was two days before The Battle of North Anna , a showdown between Ulysses S. Grant and Robert E. Lee. This photo on was taken the morning of May 21, 1864, the exact day Thomas Jefferson Marr was apprehended. Ulysses S. Grant is seated under the smaller tree on the left, with his head down, writing a dispatch, according to the photographer. In the background (click picture to enlarge) you can see a wagon train passing by, many with the Union 5th Corps emblem painted on the canvas. That was Thomas Jefferson Marr's regiment.

Reading about the conditions at Andersonville Prison is gut wrenching. Sgt. Major Robert H. Kellogg was taken prisoner there on May 2, 1864, a few weeks before Thomas arrived. He survived, and wrote the following description:

As we entered the place, a spectacle met our eyes that almost froze our blood with horror, and made our hearts fail within us. Before us were forms that had once been active and erect;—stalwart men, now nothing but mere walking skeletons, covered with filth and vermin. Many of our men, in the heat and intensity of their feeling, exclaimed with earnestness. "Can this be hell?" "God protect us!" and all thought that he alone could bring them out alive from so terrible a place. In the center of the whole was a swamp, occupying about three or four acres of the narrowed limits, and a part of this marshy place had been used by the prisoners as a sink, and excrement covered the ground, the scent arising from which was suffocating. The ground allotted to our ninety was near the edge of this plague-spot, and how we were to live through the warm summer weather in the midst of such fearful surroundings, was more than we cared to think of just then. 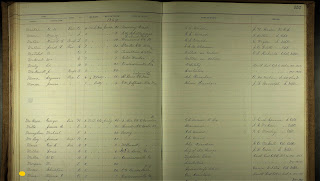 Thomas Jefferson Marr's cause of death is listed as "Diarrhea". I found his entry in the US Registers of Deaths Of Volunteers, 1861 - 1865, pictured here. He passed away on July 7, 1864. The prison population of over 31,000 in the sweltering Georgia heat, were suffering from typhoid fever, dysentery, filthy living conditions and no sanitation. When the war ended  the commandant of the prison,Captain Henry Wirz, was tried and executed for conspiracy and murder relating to his command of the camp. The conspiracy charge alleged that he tried to impair the lives of Union soldiers by subjecting them to suffering and torture. He was hanged on November 10th, 1865. 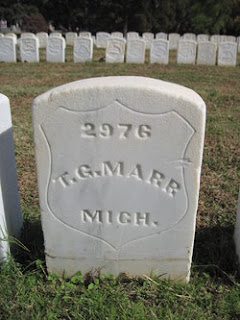 I'm not sure what I expected to discover about this ancestor, but I ended up learning a lot about a shameful part of American history. Thanks, Thomas Jefferson!  During the 14 months Andersonville Prison was in operation 13,000 soldiers died in captivity. The National Prisoner of War Museum was opened in 1998 as a memorial to all American POWs. The prisoner's burial ground is now a National Cemetery. There are 13,714 graves there. 921 are marked "Unknown". At least there is some lasting marker that this young man suffered and died in service to his beliefs. Taken prisoner in his namesake's home state of Virginia, and buried in the deep south. That's a long way from Howell, Michigan. Rest in Peace.